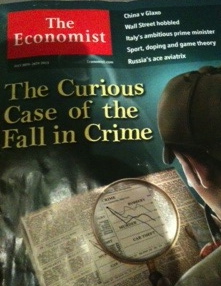 Before law school, I studied Economics and Sociology. A curious combination. Part of me wanted to pursue a Masters of Economics* at the University of Chicago with the eminent Gary S. Becker who applied the domain of microeconomic analysis to human behavior and interaction, including non-market behavior. (In 1992, Becker won the Nobel Prize in Economics Science for these pursuits.)

This afternoon, I watched a TED talk by Steven Levitt, ‘The Freakonomics of Crack Dealing’. Steven compared the organizational structure of a crack dealing gang to the organizational structure of a McDonalds. He also notes that contrary to popular myth, being a street-corner crack dealer isn’t lucrative. It pays below minimum wage. The opportunity cost is huge – jail, oh, and your boss, can kill you.

Crack broke out in the mid 80’s. Just as I entered law school. I was enamored with constitutional law and its companion: criminal defence. I wanted to use my forensic abilities to safeguard civil liberties, and to ensure that the rules of the ‘game’ were adhered to, and that no innocent people were wrongfully convicted under my watch.

I still remember my first criminal trial. A young offender who stuffed crack cocaine down his underwear. Robocop reached down into the nether parts and seized the goods, in a public park. I fought the good fight, indignant all the way, with a notorious hanging judge at the helm. Section 8 notwithstanding, guilty. I committed to get better. No more convictions.

With crack and other drugs blazing through our ‘hoods, people saw a future of gated communities with super predators and zombies on one side, and the law abiding on the other.

Almost 30 years later, there has been a receding tide of crime. Why? Lots of theories, yet it is hard to pinpoint the exact cause for this new reality. Western societies are growing older. Most crimes are committed by young men. Improved  policing. Rudy Giuliani’s ‘no broken window’ policing approach. Security measures to counter crimes, for example, cameras and anti-theft devices in stores, GPS locaters in trucks that previously would have been easy get away heist vehicles. Car immobilizers ends joyriding.  Alarms and DNA databases increase chances a burglar or rapist will be caught. Bank robbers are foiled by bulletproof screens, security guards and marked money.

Some of my formerly heavily invested in violent crime acquaintances say they are now choosing alternative career paths, simply because the time is too much risk. Deterrence.

Many of  these acquaintances are choosing new crimes: financial crimes – skimming debit cards en masse, like a flash mob, an organization can rake in millions. Technology and policing have not yet caught up to them. There is little deterrence given the upside.

Footnote: I actually started doing my Masters in Economics at the University of Toronto in tandem with my University of Toronto Law degree. This attempt at academic wizadry lasted about three weeks, highlighting law cases, and doing econometrics, and running from one end of campus to the other.  But I attended a sybaritic Beaujolais party. The drunken reckoning woke me from my reverie and I decided to just lighten up a bit, and pursue one degree at a time.