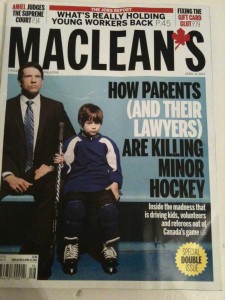 Hockey releases, and other hockey law stories. Or so you want to play in the GTHL when you live in OMHA or Alliance territory.

I am the proud mother of two hockey playing boys, Atom AAA and Tyke Tier 1 Select. I know, too well, the commitment, discipline and drive Canada’s sport pulls out of the hockey parent and the hockey player.
I am also a lawyer.
A litigator, actually. I have spent the better part of the last 23 years trying cases, marshalling arguments – securing acquittals, victories.

Type A types abound in hockey arenas. I hang around these arenas, mainly catching my breath from my steady chauffeurring. And so, I suppose, it makes some sense, that in between catching my breath,  I have made friends in these hockey arenas, and that I have been consulted to help navigate the maze of hockey releases.

Many hockey parents perceive the GTHL as the premier hockey league in the world. There are rules in place to keep hockey alive and well outside of the GTHL. Canada’s hockey presence needs both community based hockey and competitive hockey development.The Ontario Hockey Federation and Hockey Canada oversee the GTHL, the OMHA, and the other Ontario hockey associations in an attempt to balance these competing values.

This months MacLean’s magazine features an article: “How parents (and their lawyers) are killing minor hockey. Inside the madness that is driving kids, volunteers and referees out of Canada’s game.”  I recommend the read.

For full disclosure, from behind the scenes,  I advised a group of hockey playing boys and their parents with the Ontario Human Rights case which argued that the geographic restrictions imposed on players was sex discrimination. Pro bono work at its finest. I did not believe the matter would succeed given the strictures of the Ontario Human Rights Act.  I believe the only way the rules will change is through political will and, or potentially a competition law argument. These competition law arguments are being advanced in Europe in the soccer and rugby realm.

Sports brings out the competitive spirit in many. Allegedly, not always the best. In this vein, I have also attended at lacrosse suspension hearings, for parents. With advocacy, to date, all of my parents, have been allowed back into the lacrosse arena.

I also recently  assisted a 10 year old boy get back to playing competitive hockey. The OMHA suspended him for a year. His alleged infraction – playing under a false name, and/or playing in a house league at the same time as a select team, but in two different associations. We scrutinized the facts at issue and determined that there was no proof he played under a false name, nor was there any jurisdiction for this finding to have been made in the first place.  With this hockey victory secured,  as of April 14th, my young client gets to lace his skates up and go ‘blades of glory’ style to his future.